This internet browser is outdated and does not support all features of this site. Please switch or upgrade to a different browser to display this site properly.
HomeCurtin FriendsCurtin CommonsCombatting extremist violence in Australia: Curtin launches into action

With the recent news that the Australian government has listed the neo-Nazi group The Base and militant Shia group Hezbollah as terrorist organisations, radicalisation and extremist violence have been front of mind in the Australian political and media discourse.

News pages have no trouble covering the consequences of violent extremism – whether it’s the latest terrorist attack and the lives lost as a result, updates on the War on Terrorism or news of far-right radicals sparking death threats at anti-vaccination rallies.

Understanding what causes these groups to form in the first place, however, is something that is perhaps less widely understood.

The Curtin Extremism Research Network (CERN) hopes to find answers to some of those questions. Established just five months ago, they’ve already held several events, including their sold-out launch that was keynoted by Labor member Dr Anne Aly MP.

Dr Tim Rich speaking at the launch event of CERN.

The public’s desire for objective information on extremism from those with research expertise is greater now more than ever – and that’s where CERN steps in.

Founded by Co-directors Dr Ben Rich, Dr Eva Bujalka and Dr Francis Russell, CERN includes academic members who teach and research across various disciplines at Curtin University – from international relations, to history, the hard sciences, media and creative arts. They all have one thing in common: they want to explore collaborative, novel approaches to understanding and responding to violent extremism.

“We want to leverage the variety of talents and skills of our members collectively,” says Tim, “to properly identify and offer solutions to these challenges. Addressing the growth of conspiratorial thinking in mainstream society, for example, will require expertise from a myriad of social, economic, artistic, and philosophical fields – along with a whole lot of empathy.”

CERN believes in taking a preventative approach to ending extremist violence. Rather than solely cleaning up the aftermath of an attack and raising the consequences for criminal behaviours, they ask the question: what are the cultural and societal issues that are allowing certain individuals to become radicalised and dangerous in the first place, and how can we address them?

As co-director Eva Bujalka says, these are “unsexy” questions and aren’t easily solved. But since the post-Donald Trump era, and particularly since the January 6th riots in which Trump’s supporters attacked the US Capitol to overturn his electoral defeat, people in Western countries like Australia have come to see extremism not as somebody else’s problem in a faraway land, but a domestic problem that can impact communities and families here at home.

Tim’s research in extremism began by looking at Islamic terrorists in Saudi Arabia, Syria and Chechnya. But now his interests have turned inward towards those he believes are disaffected by modern society.

“These include involuntary celibates (incels), the alt-right, and vaccine sceptics,” says Tim. “These groups all have different views and goals. But at the end of the day, they are motivated by a sense that the prosperity they were promised would come from globalisation, liberalism and free market economies has not manifested for them.

“While it’s easy to attribute the anti-vaccine unrest in Melbourne, for example, to just a few radical troublemakers, the stark reality is that a lot of the ideas behind these incidences have growing salience in significant sections of our society. They’ve been seeping into our politics and digital spaces for years now. We would be complacent to think we are immune to such challenges here in Australia, especially if we enter a crisis.”

Eva, who teaches writing and literary and cultural studies at Curtin, recently collaborated with Tim and Dr Stuart Bender on a publication titled, ‘The Manosphere as an Online Protection Racket: How the Red Pill Monetizes Male Need for Security in Modern Society’. This paper explored the extreme times we find ourselves in, and the ways online content producers peddle and profit from misogynistic and alarmist narratives.

“We are grappling with climate disaster, a global pandemic, economic and housing crises, and an addiction to social media and our ‘online’ lives – these extremist groups have emerged in tandem with the anxieties surrounding those problems,” says Eva.

“While we have a tendency to believe we’re living longer and perhaps leading more secure lives in the West, I would hazard that we are also living at a time where it is becoming increasingly difficult for ordinary people to imagine a meaningful or hopeful future that is not impacted by such crises.”

According to Eva, one such group is involuntary celibates, or ‘incels’ – members of an online subculture who define themselves by their inability to have a romantic or sexual relationship, and are characterised by a culture of hatred, misogyny, and the endorsement of violence against women. At least eight mass murders have been committed in the US and Canada since 2014 by men who considered themselves incels or followed incel online forums.

“I’m interested in the ways these men feel a perceived loss of control or social primacy and defer to troubling and simplistic narratives about women,” says Eva.

Sarah Fulford, another CERN member, is a researcher on the history of misogyny and violence and is currently completing her PhD on women’s experiences in warfare. For her, the motivation to join  CERN was her concern about the influence online groups such as incel forums have on young men. As the mother of a 20-year-old son herself, Sarah finds this concerning.

Other major concerns for members are as topical. For instance, the ways that extreme-right groups have attempted to embed themselves into pandemic-related anxiety and anti-vaccination protests.

“These extremists have been trying to foment civil strife by infiltrating anti-lockdown protests to encourage bad behaviour and drive further wedges between society and the state,” explains Tim.

“Their belief is that if they keep up the pressure for long enough, the current political order will come crashing down, leaving the ground open for the establishment of a white ethno-state. While that outcome is very unlikely, they do have the potential to do a lot of damage to the social fabric of our country.”

While both Tim and Eva agree that far right and white nationalists are the most concerning extremist groups for the time being, they also stress that we shouldn’t focus so much on individual extremist groups as much we should on the process of “extremification” itself, and the social crises that destabilise, alienate or exclude groups to increase these individual’s chances of becoming “extreme”.

Eva Bujalka and Tim Rich at Mallokup Cafe on the Curtin Perth campus.

The solutions that CERN proposes are practical and policy-driven.

“Offering better social support to people will be the first step to creating more stability and peace,” says Eva. “Combatting housing and income insecurity is essential. And greater social outreach would begin to help combat a broader crisis we are seeing in disenfranchised communities.”

Tim agrees, pointing out that stable job pathways and youth housing will create social buy-in, build communities, create a genuine sense of belonging and restore the public’s trust in our political leaders and institutions.

He believes universities such as Curtin are well positioned to act as innovative ‘brains trusts’ around such policies, and work arm-in-arm with community, NGOs and government partners to address the issues causing extremist violence.

“If our only response is to ridicule and belittle them, and not look at the deeper issues that are causing their disenfranchisement, then we are failing more than just that individual.

“Ultimately, with our practical attitude towards education and research, I think Curtin is well placed to be a trend-setter for such a shift in approaches.” 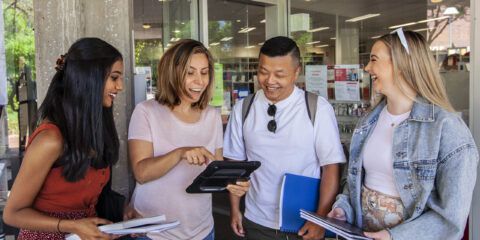 Through the humanities, we learn about the world around us, ethics, human rights and issues that relate to – and sometimes challenge – our own beliefs, values and assumptions. We learn about what goes into creating art, how language evolves over time and how history is made, recorded and understood.

Finding hope amid a pandemic