This internet browser is outdated and does not support all features of this site. Please switch or upgrade to a different browser to display this site properly.
HomeCurtin FriendsOur CommunityThe Carrolup Centre for Truth-tellingEstablishment Ceremony recap

Aboriginal and Torres Strait Islander people are warned that photographs/videos on this page may contain images of deceased persons, which may cause sadness or distress.

In partnership with Nyungar Elders and community, we are proud to announce that Curtin University has officially established the Carrolup Centre for Truth-telling. On Tuesday 10 November, Nyungar Elders and community joined the Governor of Western Australia, The Hon. Kim Beazley AC; Treasurer and Minister for Aboriginal Affairs, The Hon. Ben Wyatt MLA; and US Consul General, David Gainer, for a special ceremony to formally establish the Carrolup Centre for Truth-telling – a permanent home for a collection of rare artworks created by Aboriginal children of Australia’s Stolen Generations at the Carrolup Native Settlement, and a place to engage the wider community in truth-telling, healing and reconciliation.

Despite some wet and blustery weather conditions, we were joined by an incredible group of donors, supporters and community members, along with the Carrolup Elders Reference Group (CERG), the last known surviving child artist of Carrolup, Mrs Alma Toomath, and other Stolen Generations survivors. The Establishment Ceremony opened with a Welcome to Country delivered by Emeritus Professor Simon Forrest, followed by Curtin Vice-Chancellor Professor John Cordery acknowledging Elders, dignitaries and donors, and officially welcoming guests. Prof Cordery said Curtin was proud to recognise and celebrate this year’s NAIDOC theme, Always Was, Always Will Be, which acknowledges that First Nations people have occupied and cared for this continent for more than 65,000 years.

“We are delighted to celebrate and formally launch these two important initiatives during NAIDOC week. Both the Carrolup Centre for Truth-telling and the Yarning Circle are significant projects for the University and a celebration of Indigenous history and of Curtin’s commitment to reconciliation.

The overarching vision for the Carrolup Centre is being shaped by Nyungar Elders and community. With the Carrolup artworks as its foundation, a range of ground breaking projects showcasing Curtin’s strength in research will enable the wider story of the Stolen Generations to be more broadly understood.

Curtin University and the John Curtin Gallery are privileged to be the custodians of the collection that we believe should have a permanent home.” The Governor, The Hon. Kim Beazley AC, spoke about the resounding resilience and strength of Aboriginal people and their culture. Head of Corporate Affairs at BHP, Mr Meath Hammond, stressed the profound ethical importance of listening to Aboriginal voices with open hearts and minds, ensuring they are no longer silenced. Mr Hammond affirmed BHP’s strong belief and confidence in the Centre’s vision – a belief echoed by the nearly 600 donors whose names appeared on the Honour Roll behind him – and on behalf of BHP and all the donors, expressed his heartfelt gratitude for being invited to be part of the Carrolup Centre for Truth-telling.

CERG Chair Mr Tony Hansen was joined by Alma Toomath, the last known surviving child artist of Carrolup, and John Curtin Gallery Director Chris Malcolm. Mrs Toomath asked Chris to protect the Carrolup artworks, to which he replied that it would be his life’s greatest honour. Tony declared the Carrolup Centre for Truth-telling officially established, and we welcomed to the stage Minister Wyatt, who reflected on the significance of the Centre, followed by Centre for Aboriginal Studies Director Prof Marion Kickett who thanked all the speakers and invited guests to lunch on the lawn, officially closing the formalities. 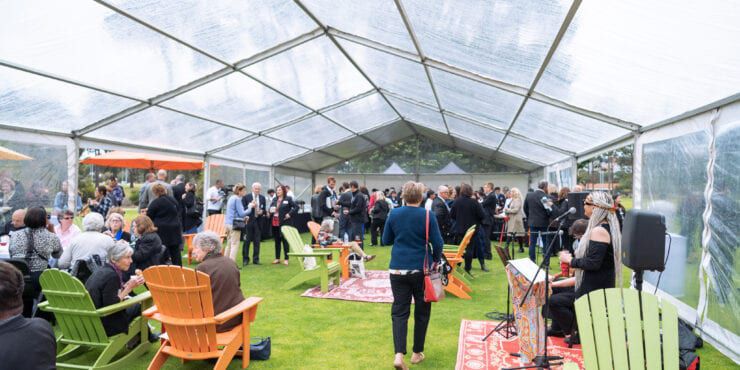 Thankfully, the rain held off as we made our way across the lawn to the Yarning Circle on Edinburgh Oval South, where a lunch of hotdogs, fresh sandwiches, wraps, and rice salad was being prepared, all featuring some unique and beautiful native ingredients. The atmosphere was wonderful as guests yarned, shared stories and were treated to an incredible didgeridoo performance and dance by Michael Spratt and Moorditj Mob – students from Wesley College.

On behalf of the Carrolup Elders Reference Group, the John Curtin Gallery, the Curtin University Advancement team and the Stolen Generations survivors who believe in this dream – we extend our deepest thanks to everyone who joined us on the day and for supporting our efforts to establish the Centre. We feel honoured and grateful to have our community give their support to this ambitious and necessary initiative – one that will create a space to tell stories, unite, heal and celebrate culture.